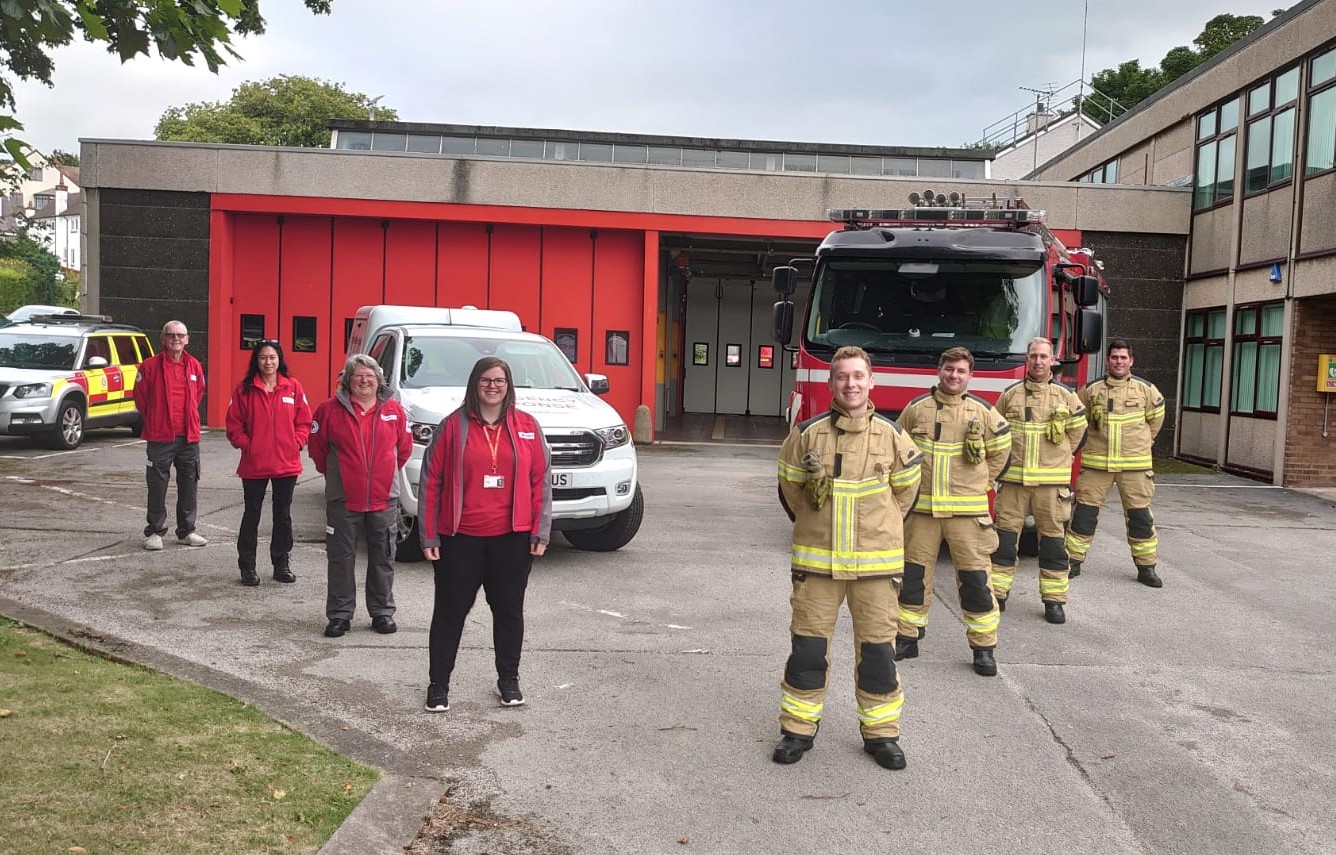 October saw the start of an innovative partnership between the British Red Cross and North Wales Fire and Rescue Service, who will be working together to support people affected by crisis across North Wales.

The British Red Cross helps people in crisis, whoever and wherever they are, while North Wales Fire and Rescue Service helps to protect an estimated population of 678,461 people over an area of 2,400 square miles as well as hundreds of thousands of tourists and visitors who come to North Wales every year.

British Red Cross volunteers will deploy at the request of North Wales Fire and Rescue Service to attend call-outs across North Wales, providing emotional and practical support to those affected. The volunteer-led British Red Cross Emergency Response team and vehicle is housed at Colwyn Bay Fire Station, and another vehicle will soon follow in Wrexham.

The highly trained Emergency Response team are volunteers from the British Red Cross who give their time freely, responding to incidents 365 days of the year, 24 hours a day. They help those affected by emergencies both during and after, supplementing the support from statutory agencies, such as Fire and Rescue Services.

They use specially adapted vehicles, stocked with practical support items such as clothes, blankets and hygiene packs. The teams are able to attend different kinds of emergency incidents to support people in crisis, such as domestic fires, floods or major incidents.

Aimee Thomas is an Emergency Response officer with the British Red Cross in North Wales, who started out as a volunteer six years ago. Talking about her work with the Red Cross, Aimee said:

“I have volunteered in one way or another since I was a teenager. Moving into adulthood, I was looking for an opportunity that would allow me to help those in need. I knew the British Red Cross were helping overseas but I did not realise that they also respond to emergencies here in the UK. I signed up as an Emergency Response Volunteer and loved the organisation, what it stood for and the impact it had on people’s lives so much that when the opportunity came a few years later to work for the Emergency Response team, I jumped at the chance. Now I have been with Red Cross for over 6 years and looking forward to this next volunteering opportunity to help our local community.”

On working closer with the North Wales Fire and Rescue Service, Aimee said:

“This new service we are launching in partnership will enable us to support our local community. Being involved in a house fire, flood or a major incident can be very traumatic  - many people have no idea what to do next.

“This new service enables us to support those people in need. Our volunteers are highly skilled in providing emotional and practical support to help them with the aftermath of the incident. We can provide a simple gesture of a cup of tea along with somewhere safe to sit, to clean clothing and support in the next steps to recovering from a crisis.. “

Henry Barnes, British Red Cross Emergency Response Manager for Wales said: “We look forward to working alongside the Fire and Rescue Services to expand our support during emergencies, ensuring that support for people’s practical and emotional needs is available whenever and wherever emergencies strike.

“The British Red Cross puts people and communities at the heart of planning. Through this partnership, volunteers will assist even more people in emergencies, working alongside the Fire Service to make what can sometimes be a really anxious time in a person’s life a little more bearable.”

Paul Jenkinson, Senior Operations Manager from North Wales Fire and Rescue Service said: “The incidents we attend often have a big effect on the lives of those involved - they can often tragically mean loss or serious injury. In addition, people may need help with organising practical elements or actions following a major event such as a fire or flood.

“This partnership will see colleagues from the Red Cross on hand and able to offer emotional support and signposting for those affected by crisis.

“We’re proud to be working with the Red Cross through this new and innovative partnership and look forward to working side by side at incidents to protect our community as a whole.”

For more information on volunteering for the British Red Cross visit http://www.redcross.org.uk to find an opportunity near you.